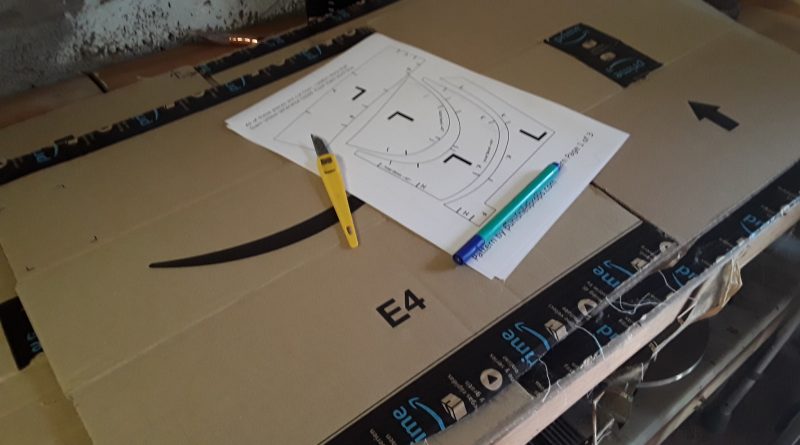 Okay, I’ll be honest, the only reason I’m writing this is because the blog title made me laugh.

I like realising something that should have occured to me years ago.

Cardboard boxes are an excellent building material. And because everything is delivered these days, it’s ubiquitous, and it’s free.

I’ve been wanting to make something for a while, using something called EVA foam, but I don’t have any, and I didn’t want to invest in some, only to be rubbish at using it.

So, when I realised I could do a dummy run and use cardboard instead, I was a happy bunny.

It fascinates me how a flat piece of card can become something so … unflat.

You can just about see in the above image that I have pinned the pattern to the card so I can trace around the shapes.

I cut these out with an Exacto knife, before I remembered I had a scroll saw.

Which made things much easier, and much quicker. Lesson learned.

And here’s the patterns cut and layered.

I decided that since the foam used in the pattern is meant to be 10mm, I should layer the card up to be 10mm. Things would have proceeded more smoothly had I not bothered, and just used a single layer of corrugated card.

Anyway, each piece has a mirror image cut, one for each side of the head.

The curved edges are glued together, which starts to give the flat some shape.

The three-layered cardboard made the shaping much harder than it needed to be.

I realied very quickly that my hot gluing was going to be messy, and it was at this point I decided that I was making a battered helmet, one that had been smacked about and rebuilt with terrible welding seams. So I embraced the bad joints, and layered them up with more glue so they would be more obvious.

Two halves done, and it looks like Uma Thurman’s haircut in Pulp Fiction.

It’s the cheek pieces that will give away what I’m making.

And its going to look NOTHING like that one.

At this point, I did some papier mache, which is something I’ve not done since I was about four. It was gloopy, and fun. And I made a terrible job of it.

But some primer starts to hide a bit of the crime, though not much.

Here I should have slathered the whole thing in jointing compound and smoothed it out with water. I didn’t though, choosing incorrectly to embrace the battered ethic fully.

As a result, the cardboard texture shows through the paint job.

When I’d masked it all off for the second colour, I really liked this colour scheme annoyingly. It reminds me a Mexican wrestler.

And here’s the final paint job.

It’s too glossy and still looks like cardboard, but I am aghast that I turned flat crappy cardboard into this.

I want to weather it and get the gloss off of it. It needs to be smacked about a bit with an iron bar too. And the visor needs to be made. Think I might make it out of an old PC monitor.