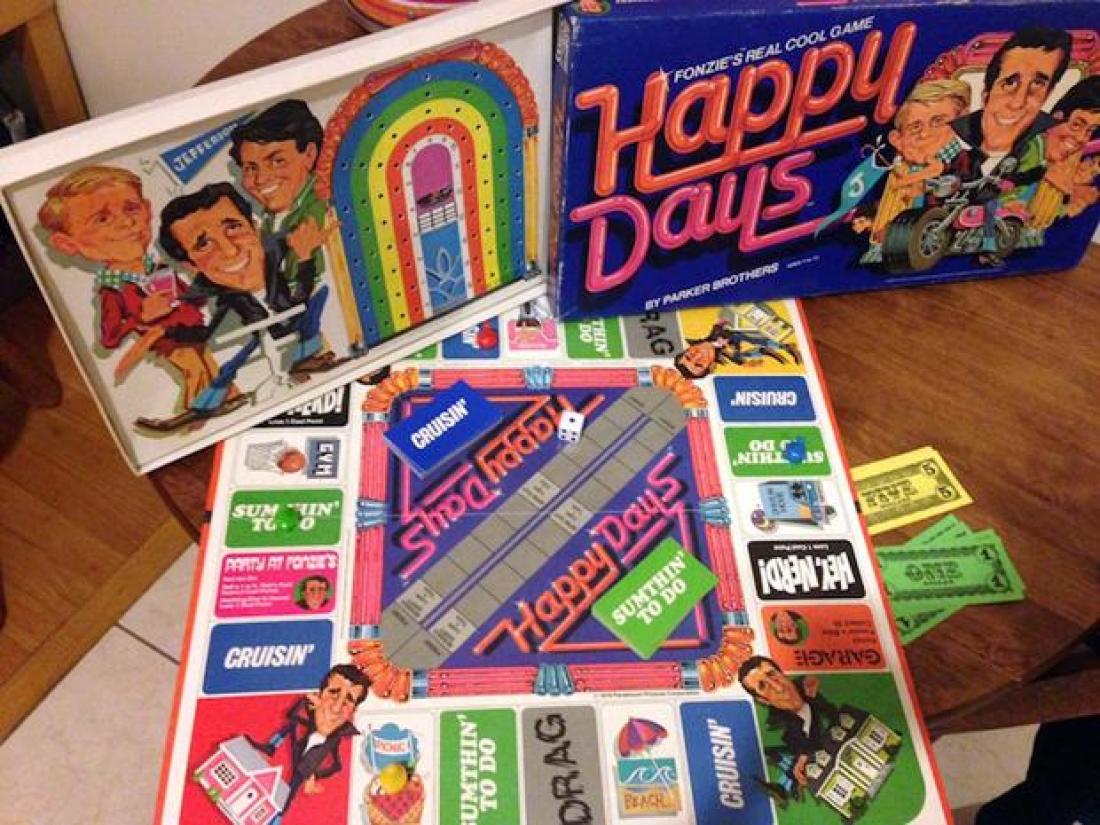 We had a look at some old UK sitcom board games a while ago, so here’s a little walk through some games based on US sitcoms. I wish I owned these, or had at least played them.

“Heey! It’s the Fonz! Can you dig his brand-new game? It’s all about being cool and scoring points for it. When you accumulate enough points on Arnold’s juke box, you win the game.

See, It’s like spendin’ time with the Fonz – you go on dates, challenge other players to drag races, or maybe just cruise down to Arnold’s. But beware, you can lose cool points as easily as you gain them. Hey, Nerd, don’t get caught hangin’ out at home. That would be uncool!”

Happy Days Fonzie’s Real Cool Game is based on the hit 1974-1984 TV show of the same name, the Fonz is hangin’ out at your house. Show him how cool you really are by being the first player to collect 16 cool points and light up Arnold’s juke box. 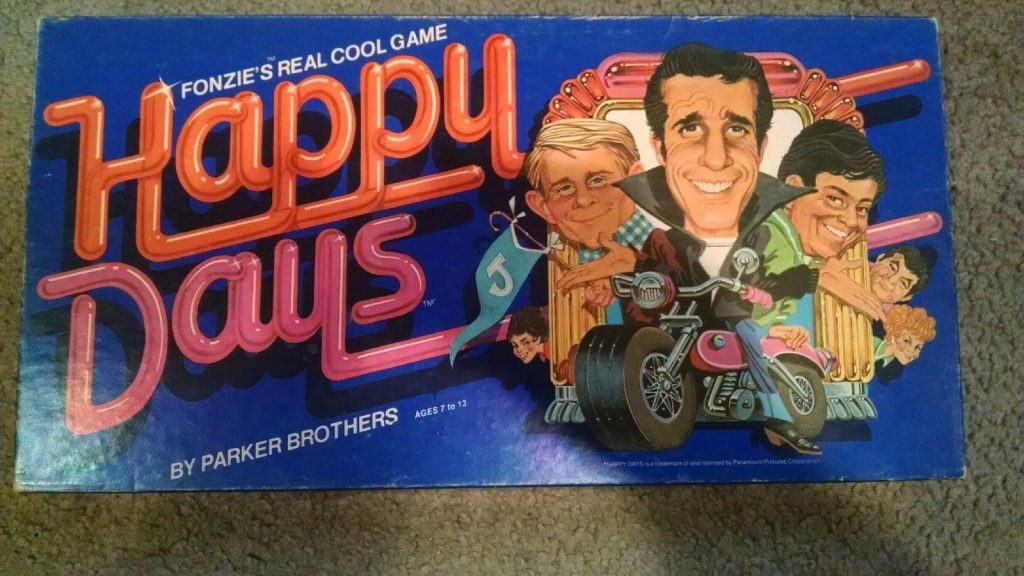 This one is a trivia based game, based on the bar where everybody knows your name. It’s a roll and move game, collecting tokens when you answer correctly. There’s also the Normie Olympics, in which you flip-off against Norm, providing a dexterity element. 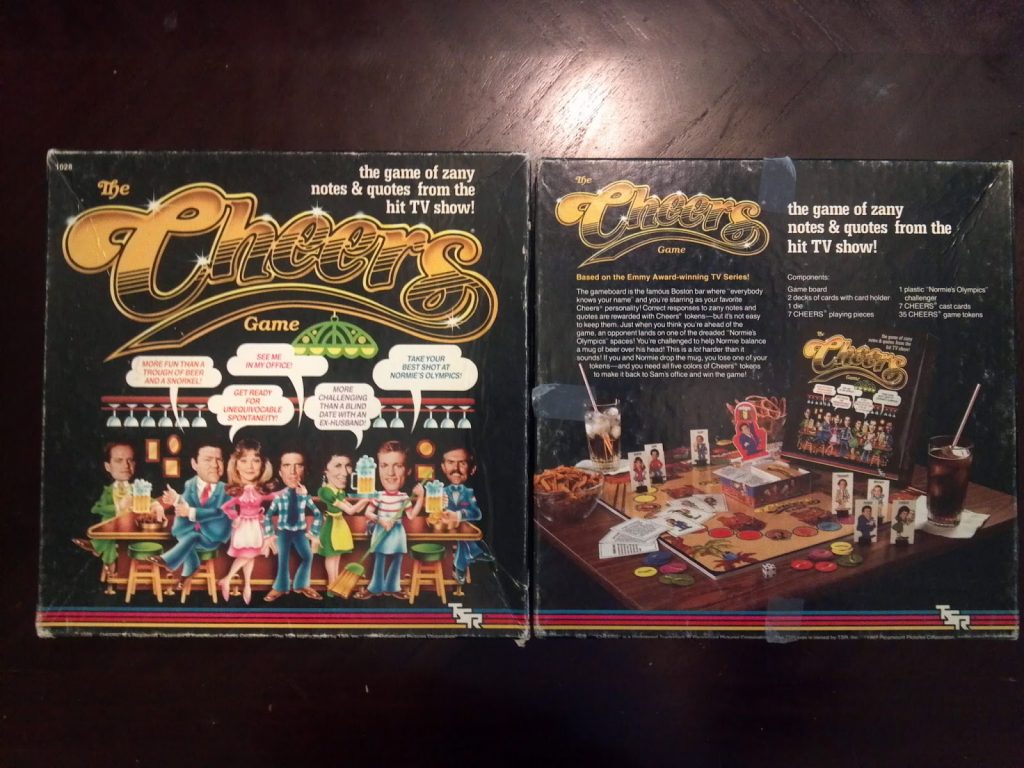 Barney Miller made it to UK screens, but was unloved by ITV, and so got lost, but here’s the 1977 game based on the show.

Assume the identity of one of Barney Miller’s detectives. Use a deck of evidence cards and arrest warrants to be the first to book all four suspects that appear on your wanted poster.

Another lovely box design too. 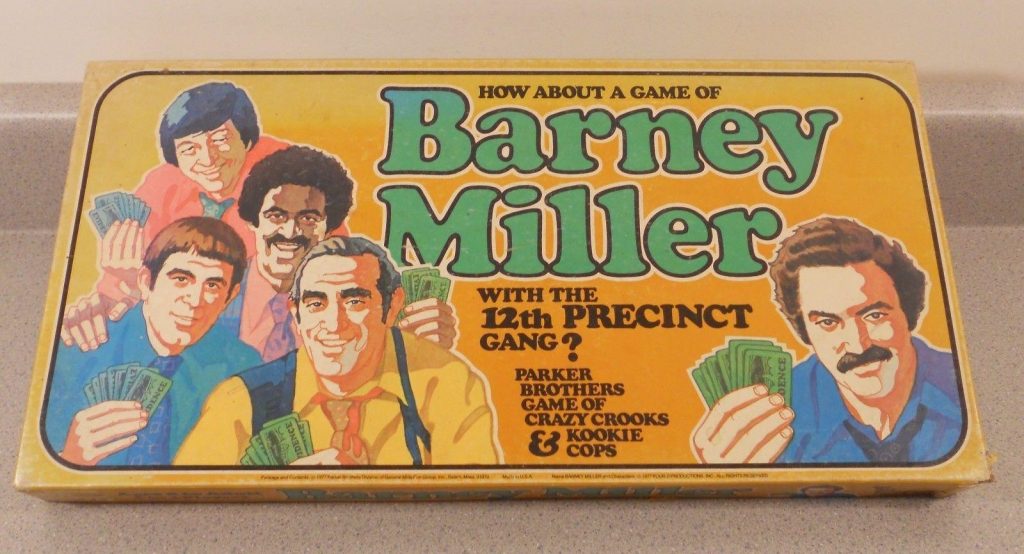 Created by Gabe Kaplan and Alan Sacks for ABC in 1975, Welcome Back, Kotter launched the career of John Travolta, and this tie-in board game. The aim of the game is to create the full phrase ‘up your nose with a rubber hose’ – an aim which may only make sense if you’ve seen the show.

There was also a card game. 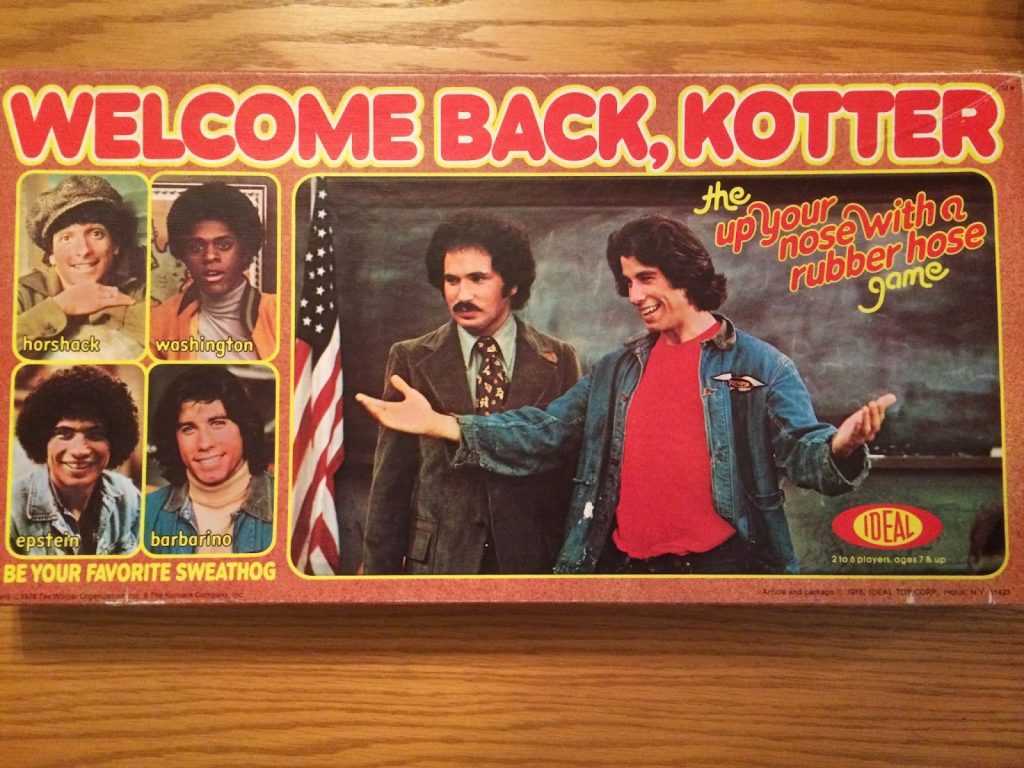 Remember ALF? Well, he’s back, in board game form.

What’s going on? ALF is trying to find his ol’ buddy, Lucky the cat, and take him out for lunch. But Mrs. Ochmonek, the nosey neighbor, is prowling through the house! The first player to help ALF avoid Mrs. Ochmonek and find Lucky wins!

The first ALF to land on the lucky space wins. 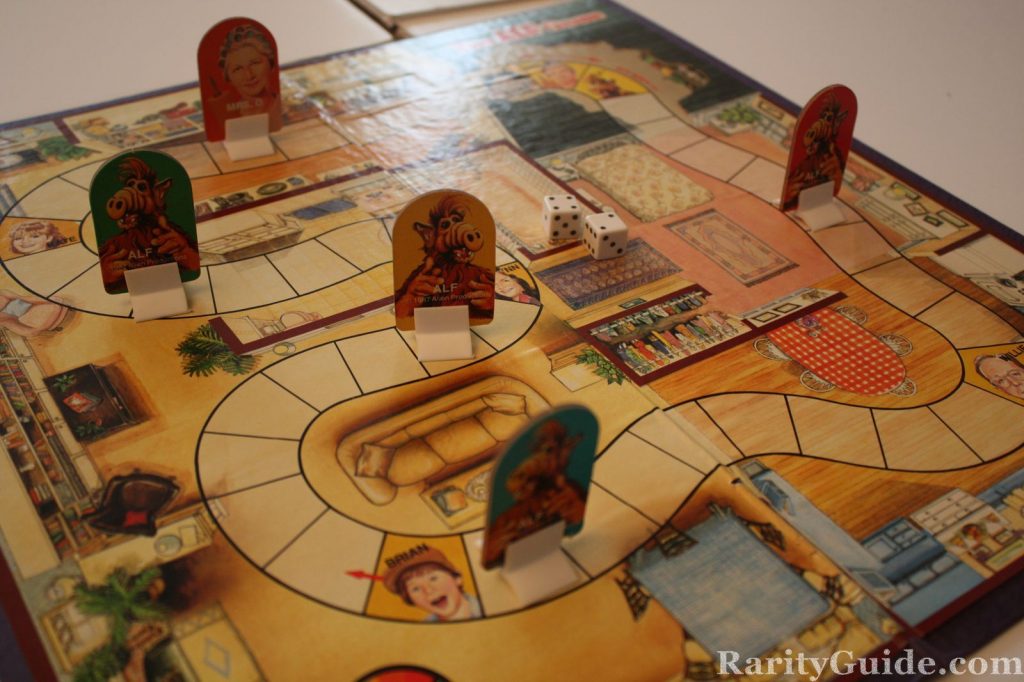 The sitcom that launched Michael J Fox back to the future saw a tie in game released in 1986. The aim of the game is to earn $100, get the family together, and have a portrait taken. 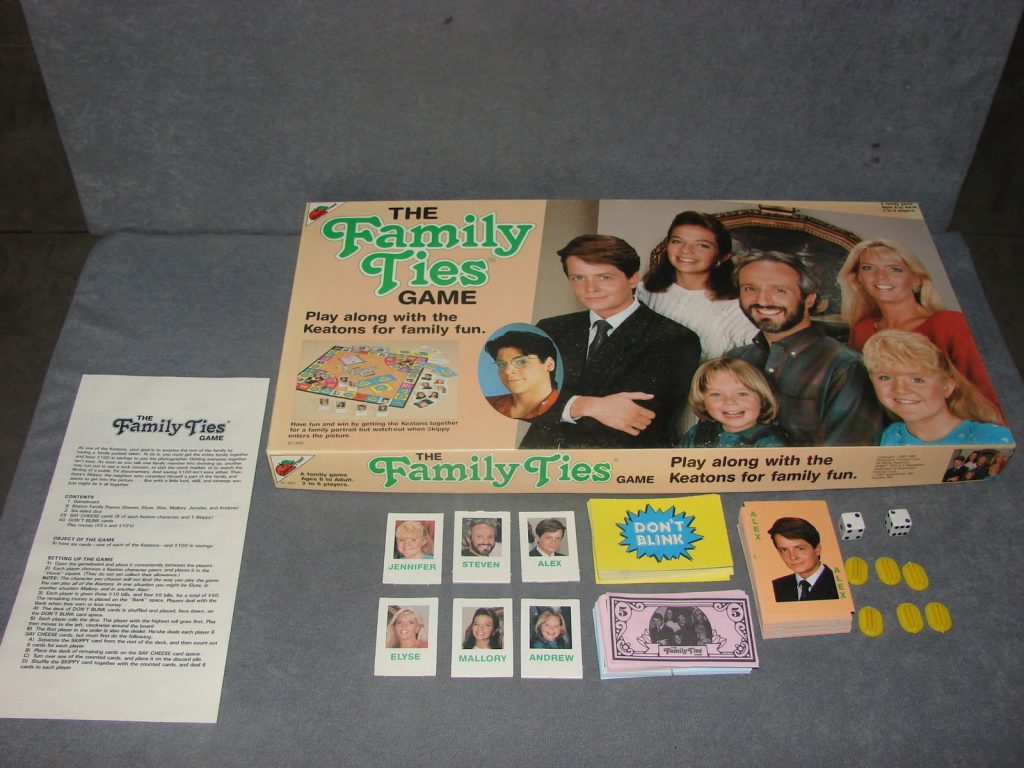 All In The Family

If you’ve not seen All In The Family, you should. Whether or not you should then play the game remains to be seen. It sounds … hmm.

This is a great person to person game for young and old. The generation-gap may show up, as “loaded” questions are asked by the “M.C.” and players write their opinions in response. No names are given when the responses (some serious — some humorous) are read off.

The object — match up the response to the person you think most likely to have said it. Oh yes! — Archie’s (or Edith’s) response is put in by the M.C. and you can also score if you guess what he said. You will find some players are so much like Archie (or Edith) that you can’t tell the difference.

Clever or unexpected responses often throw the party into peals of laughter. Animated conversation and real insight into what people are really like results [sic] from this hilarious and stimulating ALL IN THE FAMILY game.

There was an Archie Bunker card game too. 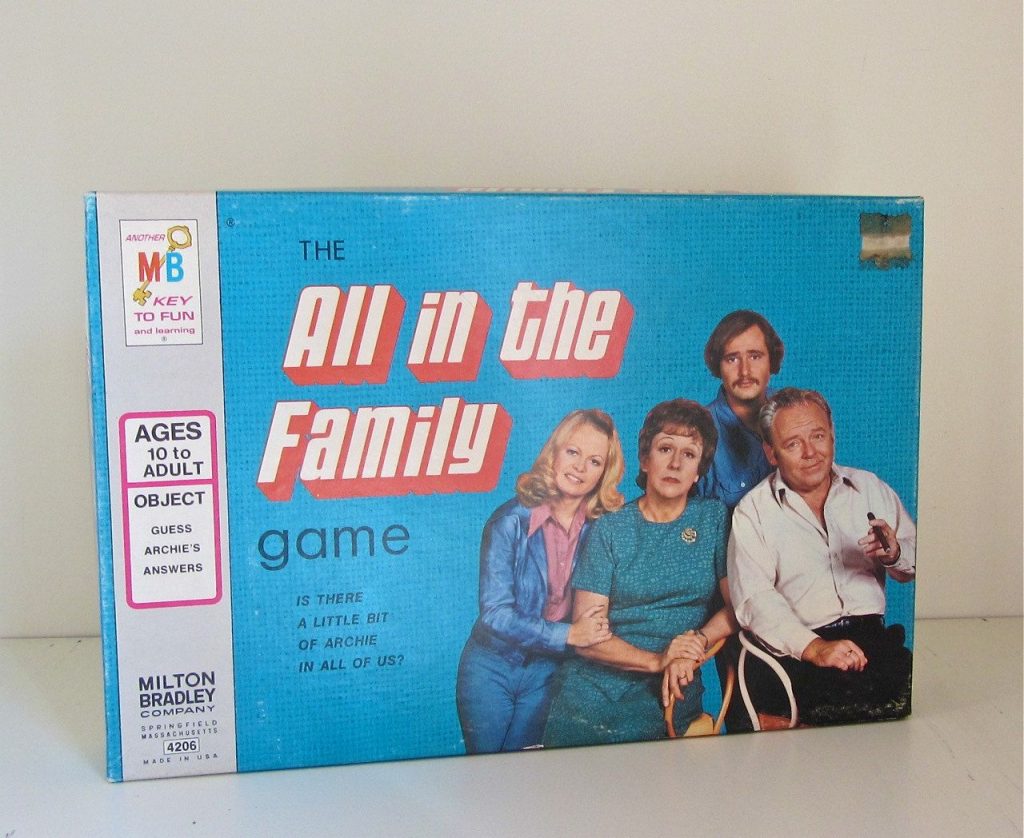 A year after the tie-in card game came this roll and move board game, featuring your favourite alien from Ork.

Meet Mork. He’s from Ork, and he’s come to Earth to learn all he can about our planet. To win the hearts of Earthlings everywhere, Mork has brought along this crazy Orkan game. In it, you and your opponents move around a special Orkan board doing such out-of-this world things as “splinking” and “grebbling up.” All the while, you’ll be trying to win coins called Grebbles. But don’t panic. Mork and his Earthling friend Mindy will be there to help. So shake hands Orkan style, and begin!

e.phemera: Blowing Out The Candle 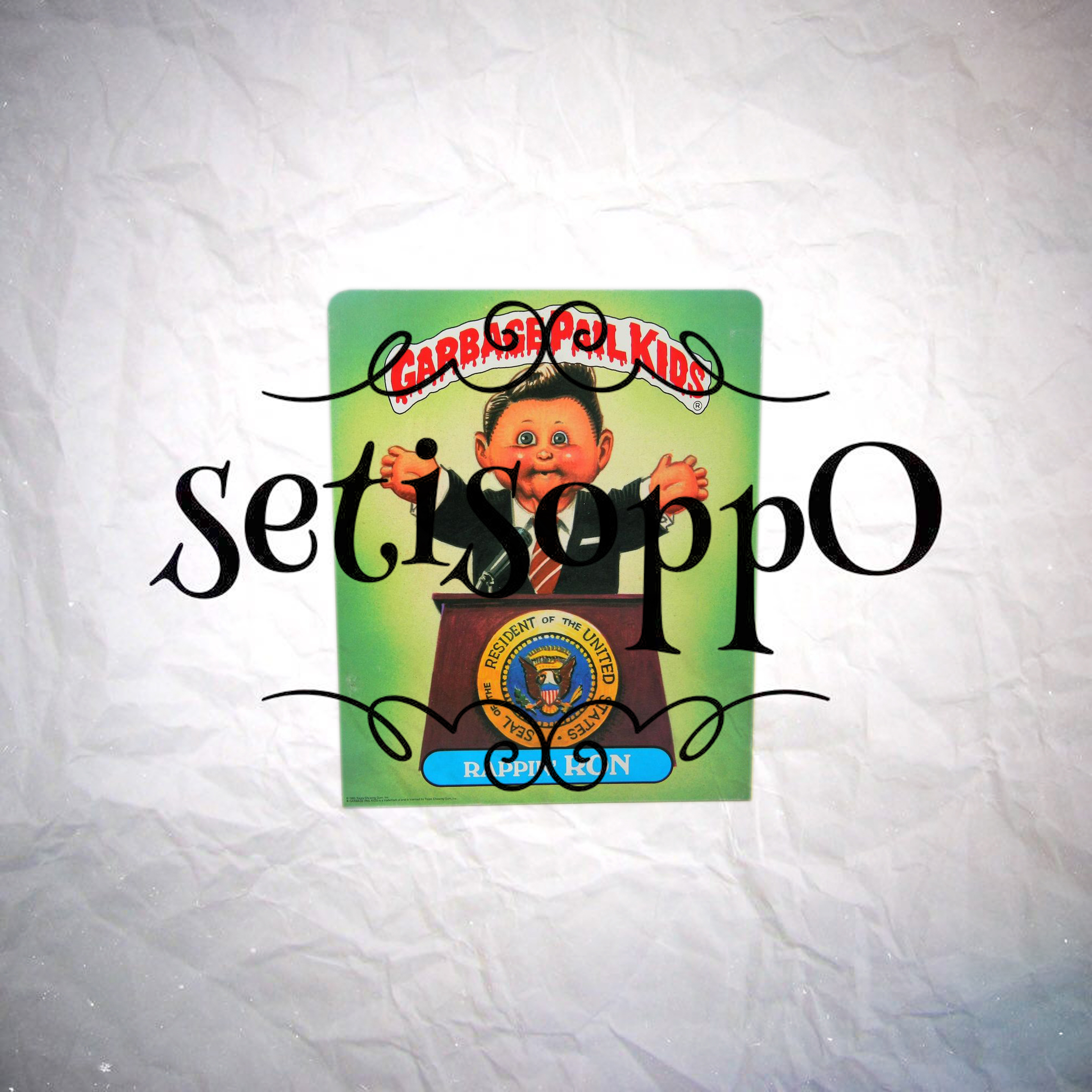 What’s The Opposite Of Bitcoin?