The old house had sat at the bottom of the road, hidden behind overgrown trees, a dense thicket of bushes, and grass that was taller than her, since forever. Becky had never dared go nearer to it that peeking through the jungle of growth to see the smashed and yellowed windows.

Only when she was eight did she pluck up the courage to go any closer.

It was getting late, and her tea must have almost been ready, but she found herself at the end of the road, sitting on her bike, wondering what was inside that old house. So she propped up the bike, took a deep breath, and plunged into the unkempt greenery. It tickled at her rather than scratched, and almost felt like it was parting to aid her path.

Once through, and wading through the grass, she could smell a musty odour coming from the old building. Shadows danced as the leaves blew in the wind, and she reached the crumbling brickwork. It felt hot to her touch, and she pressed her cheek to it, not really knowing why. She listened. Heard nothing.

The front door was all rotten wood and peeling paint, but it still hung proudly from its hinges. The giant brass sphere of the handle was almost too big for her to get a grip, and in spite of all her effort, the door wouldn’t open.

She stepped back, huffing, hands on hips, and out loud said “I just want to say hello.”

There was a click, and then a long creak, as the door swung, and let her see inside. There was dust everywhere, Cobwebs hung from every corner, gently wafting in the new breeze. Large white sheets covered mysterious shapes, and the floorboards sank gently under her weight as she stepped inside.

She dared a peek under one of the sheets, and saw nothing more interesting that the leg of a wooden chair. Somewhere inside, she knew she wanted to find a person here. An old woman, lying in her bed, who had been waiting all these years just for a visitor. So Becky climbed the stairs, tentative, in case they fell away beneath her.

Upstairs though, she found nothing.

Just empty rooms, and curtains half-hanging from their railings.

The distant sound of her father’s voice sent her running for home, and ready for food. The next day, she came back to the old house, and it seemed a little friendlier, a little warmer, even a little cleaner.

She spent the summer in the old house, playing alone, never really noticing that each time she returned that the old house seemed fresher. By the time the leaves were falling from the trees, the house had gleaming windows, vibrant colours on the walls, and the dust was gone. Becky didn’t notice. She was too busy playing, and having fun.

The winter passed, and they moved away.

Becky forgot about the house.

Years later, she was driving by, and something made her stop. She parked up and peeked through the thick growth of leaves and grass, and memories of play flooded back to her as she saw the old, neglected house beyond.

If it wasn’t for the dense thicket, she would have wandered through and had a closer look. She could have sworn the door opened itself. Could have sworn she heard a contented sigh as the air from inside rushed out. It was like the house was smiling.

She was late for her meeting. She got in the car, and left.

In her rear view mirror, the massive trees waved sadly in the wind. 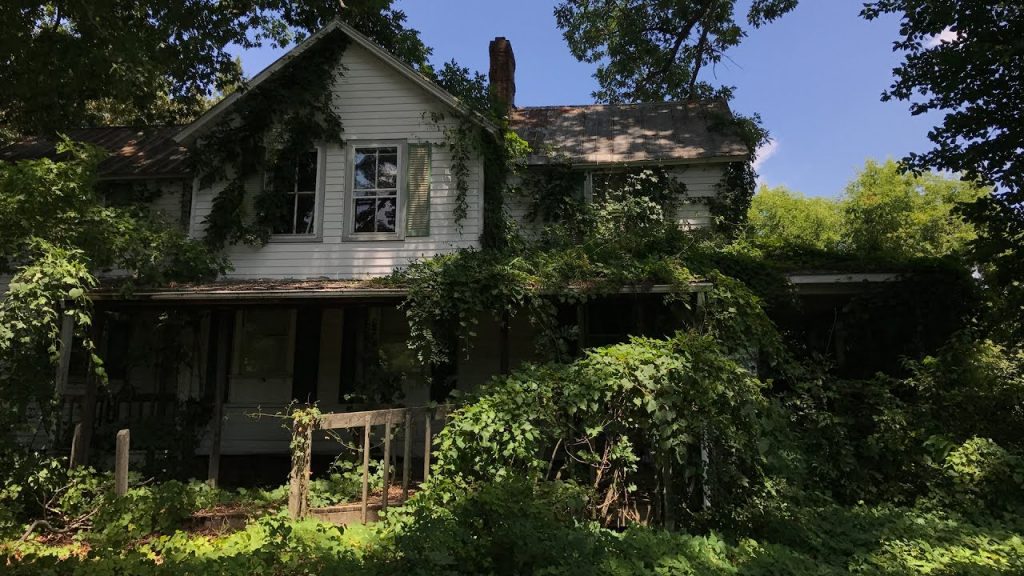