I like the talk show format, especially the one we see on US screens. Sure it can get tired, and boring, and unimaginative, but when it steps outside of its confines and tries something new, it can truly be brilliant. It’s a hard thing to get right, as witnessed by these three epic fails.

In 2004, CNBC decided to give a talk show to John McEnroe. And you can’t make me do a ‘you cannot be serious’ joke here, because it kind of seems like a good idea without the benefit of hindsight. He’s pretty charming, he’s eloquent, and he can be funny; if nothing else he can fill air time, which is something most underrated.

The show garnered a 0.0 Nielsen rating on at least two occasions, and was axed after four months. Given the choice to leave immediately, or carry on for another few weeks, McEnroe opted for the latter, if only to give more work to the outgoing crew – which is a nice gesture at least. Here’s a clip from one of the shows which aired after the axe fell.

And then there was …

A talk show that ran from 8th June to 4th September in 1998, and was hosted by former basketball legend Magic Johnson. Wonder why they keep giving these things to sports stars? As you can see from the short life span, this one didn’t last very long, in spite of a ratings bump from a scurrilous appearance by Howard Stern.

I’ve talked about this one before, but …

probably should have been brilliant, or at the very least, watchable, but it only lasted five weeks on the Fox network. The network had originally wanted Dolly Parton to host their new talk show, but she declined, and suggested Chase instead. For this, he pocketed $3 million, and the network spent another $1 million renovating the theatre.

Already four huge ones down, they probably made a wrong choice airing the first episode just one week after Letterman started his show on CBS. Their second mistake was to promise advertisers six million viewers, when CBS was promising only four. The actual ratings were half the promised ones, and on occasion, a third. Chase later blamed it all on the network, in that way he always does. 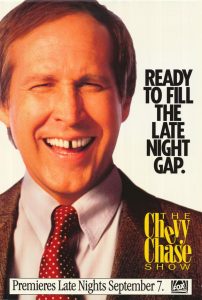