If you want to quickly grasp the structure of sitcom, go and watch a Road Runner cartoon. Most, if not all, of the best sitcoms feature a main character with a clear desire to do something, usually trapped by their circumstances, but ultimately destined never to escape. It’s that which separates it from drama – a sitcom character should never really learn or evolve. 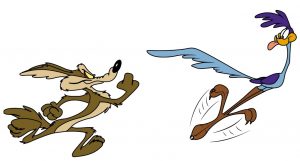 Wile E. Coyote wants to eat a Road Runner. In fact, he’s trapped in that cycle, because he’s so damn hungry. Look at how thin he is. And while every protagonist is only as good as their antagonist, it’s not always the Road Runner who thwarts Wile’s plans. It’s often himself; he is his own worst enemy.

So, Wile needs to eat. He formulates a plan to catch the Road Runner, and he fails. Reset, and begin again.

If he ever caught the Road Runner*, it would feel wrong. He would probably eat it in a Tarantino-esque bloodbath, or he would be confused and let it go, perhaps after installing a jet pack on its back.

See also the final episode of Only Fools And Horses – the proper one, where they walk off into the cartoon sunset – Del has got everything he wants; they’re millionaires. And the one thing that makes that ending so satisfying is his final line, ‘this time next year, we’ll be billionaires”. He’s already built himself the same trap again.