Vic slammed the door of his cherry red Ford GM Chevy shut with a slam. He loved this car. It was just like him in many ways. Muscled. Grizzly. With flared wheel arches. Just like Vic. An American icon, from a bygone past. A relic some might say. Like Vic, who some people said was a relic. From the past. Like his car. But like Vic, the cherry red GM Ford Chevy was also intellectual, and given over to moments of self-reflection.

Vic put his lips to a Camel butt.

This was one such moment. Vic was having doubts. Not that he’d let Harry (his boss, the man who paid him money to perform the relevant tasks pertaining to his job as a tough cop on the mean streets of downtown Flushing Meadows) ever see those doubts.

As Vic probed the Camel’s tip with his tongue, he watched the endless stream of CSI boffins stomping about in their white paper suits, like some kind of queer musical they put on down in the queer part of town. But the doubts were creeping in.

Maybe this wasn’t the work of the Bay Area Bow and Arrow Beast. Hell, all these bows and arrows through the teeth started to look the same after a while. And who’s to say this wasn’t a drive by.

Or maybe it was suicide. Some depressed young broad couldn’t face life without her man and so swallowed a longbow. Stupid bitch. Just like his ex-wife, who was also a stupid bitch. No, Vic couldn’t think like that – about it being suicide, not about the Asian victim being a stupid bitch. He knew, since the PC revolution that not all women were like his bitch ex-wife. Just most of them.

The Camel was spent. Vic had sucked it dry. He gave it one final toss in to the ashtray. This addiction to finishing off Camels was making his car stink.

Vic tried to focus. It was hard because he needed glasses. But you’d never see Vic Malone wearing a pair of pansy ass geek windows on his manly muscular nose. He once heard some broad back at the station asking if Vic was the best looking cop in town. The answer? Does the Pope wear a condom?

Goddammit, this ain’t no suicide.

That shit for brains Bay Area Bow and Arrow Beast was laughing at him right now. Thinks he can get away with murder again does he? Not now Vic Malone’s on the case. Not now he’s rooting around in Vic’s backyard.

Where to start? He’d leave all the science and forensics and investigation to the science boffs. Vic hunted with his gut. None of that cerebral crap. And Vic’s gut knew from published studies that murdering scum liked to come back to the scene of their crime. To re-live the buzz. Vic knew that for a fact. Not from watching too many cop shows on TV, but because he was a hard-boiled detective trained by Her Majesty’s NYPD.

Dammit, that scum might even be here now, watching everything and laughing.

Vic began to use his finely honed detecting skills to scan the faces of the crowd. Blonde woman, surfer type, nice rack, but not the type who could murder. Next.

Man. Mid forties. Black Caucasian. Definitely dodgy, but serial killers hunt within their own ethnic group. So Vic knew he was looking for a white man. Next.

Jewish male, you can tell by the Yamulke, which is a traditional Jewish head scarf. Seems more than a little interested in what’s going … hang on. Back one. What was that?

The man in the black cape and eye mask, the one with the evil laugh. Vic’s eyes had seen something, but they didn’t know what. Something under the cape perhaps? His eyes almost seemed to zoom in like a movie camera, searching, probing, penetrating. Looking for what he’d seen. What was that? A glimpse. But of what? Vic stared unblinking, timing his blinks so as not to miss a vital clue. And there it was. As the man tossed his head back and cackled, his cape swung loose behind him to reveal …

So what? Most cops would think that, but not Vic Malone, who was so good at being a cop everyone said he was probably the best NYPD cop in Orange County. This wasn’t any old bow and arrow. The distinct shape of it told Vic that this bow and arrow had been made in London. And Medieval London at that.

Vic’s lip curled up into a tight straight line of masculine determination. The Bay Area Bow and Arrow Beast was on HIS patch, and he was LAUGHING. Except no, he’d stopped. And now he was staring back at Vic, a look of horrified realization his face. He’d been rumbled. If only he wasn’t wearing that mask, Vic thought, knowing that his instant recall and photographic memory would mean he could pick his face out of a book of mugshots in ten seconds flat – except now, he couldn’t, because the area around the killer’s eyes was covered with black cotton.

Their eyes met, and locked into one another. It was like a connection had been made. The Killer was daring Vic to catch him, and Vic was snarling back, with his eyes, daring the butcher to kill again and risk his wrath. The last man who killed on Vic’s watch was still skewered on the spike of the Empire State Building, a warning to the city that Sherriff Vic was in town.

The scumbag must have sensed the rugged determination seeping from Vic’s eyeballs, because he panicked, and with a swish of his cape, he turned on his heels and began to run as fast as he could towards the freeway on Madison Avenue.

“Shit!” Vic swore, because shit is still a swear word in New York, even though their language is more coarse. That scum sucking killer bastard was getting away.

Vic grabbed the stick shift and crunched the automatic gearbox into first. Vic could smell the adrenaline pumping through his veins, and he could hear the burning rubber streaming from the tailpipe, as his 1957 GM Cherry Red Ford Chevy peeled away with a screech.

No time to navigate around the crowd of innocents, he floored the gas pedal and propelled the hunk of metal at them – their lives were expendable if it meant saving lives. And this shit bag wasn’t getting away to kill another innocent person.

Vic cleared the blood from the windshield using the wipers, getting rid of the bits of skull and brain that were obscuring his pursuit. The car growled with immense speed as he did a handbrake turn around the corner and piled it into the thin alleyway. Speeds like this were dangerous, but not for Vic who had done it a lot.

The speedo revved higher as he chased after his prey like an owl who could drive a car at very fast speeds. The garbage bins streaked by as the monster’s engine roared forward, echoing so loud most of New York could hear it, including Palm Beach which is right on the outskirts.

The killer was running hard and fast, looking back over his shoulder at the descending menace – Vic noticed a small but very distinct shaped mole on the brute’s face. He’d have to remember that mole, it might somehow prove useful later.

Slamming his foot down all the way now, the car bellowed a motorized bellow, and the speedo said he was doing 80 down the alleyway. But the Bay Area Bow and Arrow Beast was still getting away. 90 now. 100. Finally he was closing the gap, when with a sudden swerve, he had to avoid a baby sitting in the alleyway happily playing with a firetruck. At night. Anyone else would have squashed that baby dead, but not Vic, his reactions were quicker than most men’s.

But those few extra seconds had given the prey an extended lead. Enough time for him to traverse around that giant hole in the road at the end of the alley. Vic knew if he took the time to navigate around it too, he’d lose his man. His boot almost pushed the accelerator pedal through the floor of the car, as he lurched it up to 150 miles an hour and towards the massive gaping hole in the road.

Would he make it? Who knew, but Vic would soon find out.

Continue to Chapter 3 or buy the whole book now on Amazon UK or Amazon US. 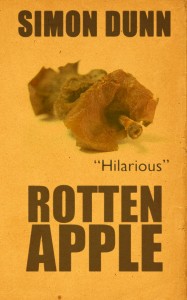 You Give Me Fever